Skip to main Skip to content Skip to menu

If you appreciate my work and want to give something back, please …

Help support Pro_News and become a member of our Sponsors Group
The tip jar is at PayPal, but does not require a PayPal account
Treasury

Til Toppen Back to main Skip to menu 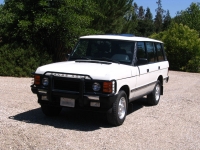 1995 LandRover Range Rover LWB
One of the very last of the Long Wheelbase Range Rover County's. An extremely versatile vehicle with lots, and lots of legroom and storage. Even with front seats full back there is ample room to stretch out in the back. And there is still a generous trunk.

A California car, this example of extraordinary British Engineering (from the 1960's and '70's) has all the options, including 6 CD auto-changer hidden in trunk, NOAA Weather Band Radio, and of course the legendary permanent 4WD and Low Range transfer case. The 1995 also has the later dash, with a heating and A/C system which actually works, unlike earlier models, with dual temperature controls. And the long wheelbase adds a full 8" mostly in the area of rear legroom, and a much smoother ride.

A Californian car, we've owned it since 1996 with 14K on the clock. It now has 114K miles, but it still looks and drives as well as it did when we bought it - thanks to a new Steering Box, new ABS Pump, new fuel tank (recall) and fuel pump (warranty), Radiator Header Tank, Thermostat, and uprated Battery. When the suspension air bags were failing recently, sagging overnight, we reluctantly switched to coils springs - only LR dealers can rest the system after changing out the air bags, and I couldn't find one who would. So put on quality springs, and replaced the helper shocks with Bilsteins. The original air suspension controls, pumps, etc, are still in place, so it could be converted back to air, with new bags and replacing the system fuses.

Car has been a daily driver for all it's life, but has been looked after, and its interior leather and carpets are all original and in great condition. The English paint has suffered a tad in the Californian sun, but polishes up quite well. Always serviced initially at Land Rover main dealer, and more recently at a Rover Specialist for older Jaguars and Rovers.

A great base for a little TLC, or even a full restoration project, as the interior is in unusually fine shape, and the usual mechanical bug-a-boos on this model have been taken care of.

LR Dog Cage hooks up when not in use

We've owned since 1996 and cared for interior

Re: 1995 Range Rover County LWB - FOR SALE   -   Se hele kommentaren interested in this truck. In market for white LWB and looking to purchase in next week or so. Have one other one i found. Is this still available? ...  mer

Re: 1995 Range Rover County LWB - FOR SALE   -   Se hele kommentaren Yes, it is still available. In fact we haven't got around to advertising it yet, beyond posting on the site.

See my PM to you on the details.  mer
Til Toppen Back to main Back to content